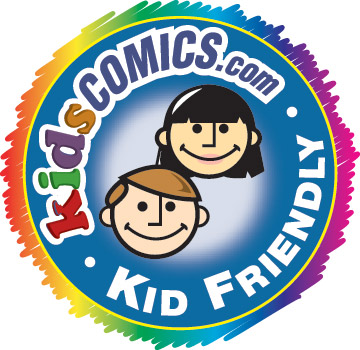 The PREVIEWS catalog is full of great comics for young readers, and August’s Kids Comics column is full of fun kid friendly comics. This month Vanellope explores the wonders of OhMyDisney.com in Wreck It Ralph 2 — Ralph Breaks The Internet HC, the world's most famous mouse celebrates his birthday in the Mickey Mouse 90th Anniversary Collection TP, Adrienne is on the way to rescue her oldest sister in Princeless: Find Your Sister #1, and more!

Every month we pick a few titles out of the PREVIEWS catalog that any comic reader will love, no matter their age. Whether these stories are for a young reader new to comics, or a great all-ages story perfect for you, these stories make a great addition to any bookshelf. Look below to see the titles that will soon arrive at your local comic book shop along with many more great comics and toys, and be sure to pre-order your favorites!

He's got two big hands perfect for knocking down buildings and smashing cars small as soda cans. He's a great video game bad guy. The best! But his home is in 8-bit game land. What happens when he's taken out of his safe space and put in an environment where technology has advanced by decades? What you see is Wreck It Ralph 2— Ralph Breaks The Internet HC (AUG180341) from Dark Horse Comics! In this book you'll find two stories, set before and after the events of the feature film! You'll find it in the Premier Comics section of the August issue of PREVIEWS!

Star Wars Adventures: Tales From Vader's Castle #1
So you think you know what it's like to be a rebel? Maybe you're just eager to join the Resistance, but you would like a refresher course first in the ways of the Sith. Would you like to know what you're getting into if you take on the Empire? Well, with Star Wars Adventures: Tales From Vader's Castle #1 (AUG180680) from IDW Publishing, your favorite Star Wars characters are featured in classic spooky stories! In this exciting weekly series, you'll see what happens when Obi-Wan Kenobi, Han Solo, Chewbacca, the Ewoks and others have to fight their way out of Darth Vader's castle! The first of five books can be found  in the Premier Comics section of the August issue of PREVIEWS!

He's the mouse who started it all. There wouldn't be a Walt Disney if there wasn't a Mickey Mouse. In 1928, when he first appeared in the black-and-white cartoon Steamboat Willie, Mickey Mouse entertained people like no other cartoon before him. It made him a legend, and he has been the face of Walt Disney in books, movies, and merchandise. His adventures are countless, but the best memories have been captured in the Mickey Mouse 90th Anniversary Collection TP (AUG180789) featuring his most beloved creators and most exciting adventures! The ultimate collection of Mickey Mouse comics for the true fan! You can find it from IDW Publishing in the Premier Comics section of the August PREVIEWS catalog!

Do you like to watch Adventure Time on TV? Well, you may have heard that after Season 10, the show will no longer have new episodes made for Cartoon Network. But that doesn't mean Finn and Jake are gone forever. Nope. The people at KaBOOM! will be telling new stories of Finn and Jake in a new Season 11 comic book series! It's a new day! Make sure you watch everything that happens in Season 10 of the TV show, because the comic series begins in the aftermath of The Great Gum War, where Finn, Jake and the entire land of Ooo have to pick up the pieces with some new and unexpected friends! You can find Adventure Time Season 11 #1 (AUG181352) in the BOOM! STUDIOS Premier Comics section of the August PREVIEWS!

Time can go very slow when you're depressed. It can go even slower if you are trying to reconnect with a loved one. Adrienne finds out just how slow the clock can tick because, finally, she is on the way to rescue her oldest sister, Alize. Since the day she left the tower, this plan has been the most important thing in her life. But now, it's all falling apart because Bedelia has stayed behind in the mountains with her family! So now Adrienne can't find Alize's tower! Will she end up lost and alone wandering the desert? Find out if its a good day or unending tragedy for Adrienne in Action Lab's Princeless Find Yourself #1 (AUG181430), which you can find in the Comics section of the August PREVIEWS catalog!

These are just a few of the cool Kids Comics books you can pre-order from the August PREVIEWS. Look for the Kids Comics icon throughout the catalog and make sure to visit KidsComics.com to see the all-ages titles coming out this week!